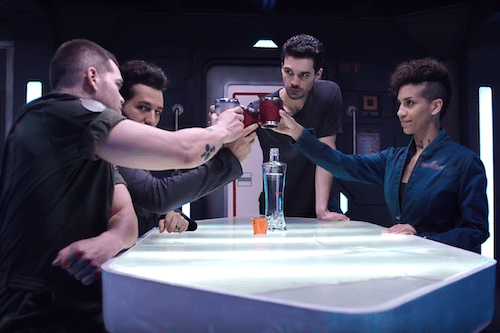 As I was watching The Expanse, a science fiction TV series, I realized that the show demonstrates, perhaps without meaning to, the value of ideological diversity within a team. The story follows the small crew of the Rocinante as they stumble into a solar system-wide conspiracy that threatens a fragile peace among a United Nations-led Earth, an independent Mars, and the volatile factions in the asteroid belt and outer planets. Two of the crew are “Earthers”—one with a much more privileged upbringing than the other—one is a Martian, and the other is a “Belter,” raised on mining ships. They not only have radically different backgrounds but also diverging ideological orientations and opposing political allegiances. Yet to survive, and successfully expose an existential conspiracy, they overcome and exploit their differences in making wise and creative choices.

This shouldn’t come as too much of a surprise. Research suggests that ideological diversity can help teams work together more effectively, particularly when success depends on gathering information and deciding how to act on it. The reason ideological or political diversity matters has to do with bias—if team members share the same bias, it likely won’t be rectified since groupthink can set in. Diversity dislodges groupthink, social scientists explained in a July article, “Are Politically Diverse Teams More Effective?” in Harvard Business Review. “Diverse perspectives enable groups to search a wider space of solutions to their problems,” they wrote, “even if that creative process can be uncomfortable and taxing.”

The researchers—Feng Shi, Misha Teplitskiy, Eamon Duede, James A. Evans—supported this claim in a paper earlier this year, “The Wisdom of Polarized Crowds,” in which they found that ideologically diverse editor teams, on Wikipedia, created the highest quality pages, not only pertaining to politics, but also social issues and science. Bias “enables access to useful information and perspectives forged deep within ideological echo chambers,” they wrote in Harvard Business Review. “Collectively, teams with mixtures of bias that are willing to engage and collaborate can yield superior performance.” Watching The Expanse, it can seem like the crew of the Rocinante would’ve been killed several times without this advantage.

Not long ago, for Nautilus, I interviewed Teplitskiy and Evans about their work. A portion of that engaging discussion follows.

What does Wikipedia tell us about diversity?

James Evans: People talk about the importance of diversity. It’s not diversity in general; it’s diversity in specific. If you have these different ideologies, it’s associated with different filters on the world, different intakes of information, and so when it comes to constructing reference knowledge on an encyclopedic web page that’s supposed to thoroughly characterize an area, you do a much better job because you have a lot more information that’s attended to by this ideologically diverse group.

Editors working on a social issues page said, “We have to admit that the position that was echoed at the end of the argument was much stronger and balanced.” Did they begrudgingly come to that? They did, and that’s the key. If they too easily updated their opinion, then they wouldn’t have been motivated to find counter-factual and counter-data arguments that fuel that conversation. We found that more diversity is associated with longer conversations. If they were immediately willing to give up on these things, then it wouldn’t have produced the sustained competition that ended up generating the balance that they, themselves, came to appreciate.

Which pages on Wikipedia benefit most from political diversity?

Misha Teplitskiy: Psychologists and organizational scholars call this “task relevance.” It’s the idea that diversity in ideas should help only for tasks for which diversity is relevant. You expect ideological diversity to be most relevant for politics, less so for social issues, and less so for science. The surprising feature there is that it’s at all relevant to science, but generally we expect it to matter less and less the farther you get away from task relevance.

What can scientists learn from your results?

Evans: My hope is that not just scientists, but people with opinions and political stakes in general, can seriously consider the fact that people who don’t share their political viewpoints have something valuable to say—and even if they don’t have something valuable to say about a particular political topic, that their different experience and perspective has likely given them access to other kinds of information that will be valuable and new to you. That’s the key to unlocking the potential of polarization: to allow people to constructively contribute to knowledge projects and other projects together. If you know enough about Wikipedia to open up the talk page, which anybody can do but almost nobody does, you’ll see extensive discussions going on. You’ll see people carefully, painstakingly employing diverse perspectives that are perceived by experts as being systematically better. It just produces more robust knowledge because there’s less ideological filtering going on.