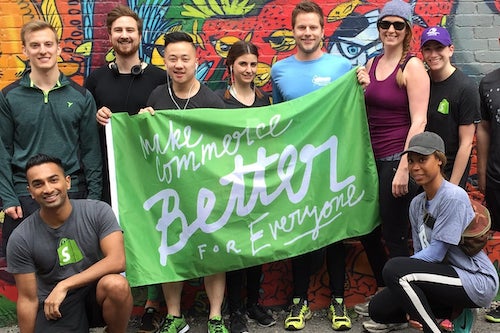 Update: The video of our discussion with David Sloan Wilson, Erika Cheung, and Toby Shannon is now available for viewing! Watch it here or below.

On a trip to Ottawa, a few years ago, I got to tour the offices of the e-commerce company Shopify, courtesy of a friend of mine I was visiting who works there. Shopify makes and updates a platform over 800,000 online stores from around the globe use to sell their products, which in 2018 amounted to around $41.1 billion in sales. I remember the workplace looking immaculate and like a fun and exciting place to be. My friend, whose “discipline” at the company is user experience, said he’d been loving it. Shopify has a culture of constant and constructive feedback—posters on the walls say, “Feedback is a gift”—and annual in-company conferences offer employees opportunities to level-up their skills or learn new ones related to their work. He knows that his growth and development matter to the company and, as a result, he feels not only a strong sense of identity and purpose, but also autonomy. He, like many of his coworkers in the R&D department, are given space to make their own decisions when it comes to completing tasks managers assign. It’s a consequence, among other things, of the company taking seriously the thesis of Drive: The Surprising Truth About What Motivates Us, a book that’s visible on hallway bookshelves. When I told my friend recently that one of Shopify’s executives, Toby Shannon, the company’s chief support officer, would be part of an Ethical Systems panel on how evolutionary thinking could foster more ethical and effective cultures, he said he wasn’t surprised. Shannon, he told me, often gives inspiring talks that weave in ideas from psychology and anthropology.

Well, on a recent evening at NYU’s Stern School of Business, it was a pleasure of mine to attend that panel. Shannon was part of a fascinating discussion with evolutionary anthropologist David Sloan Wilson, co-author most recently of Prosocial: Using Evolutionary Science to Build Productive, Equitable, and Collaborative Groups, and Theranos-whistleblower Erika Cheung, who just launched Ethics in Entrepreneurship, a nonprofit dedicated to instilling ethical culture in startups. The conversation revolved around what Wilson called the “core design principles” of effective groups—businesses included—which he, along with social scientist Michael Cox and political economist Elinor Ostrom, elucidated in a 2013 paper in the Journal of Economic Behavior & Organization. Wilson explained that the principles, of which there are eight, emerge from the evolutionary dynamics of cooperation in our own species and others.

In his introductory remarks, Wilson did his best to briefly illustrate those dynamics —otherwise called “multilevel selection”—using the classic board game Monopoly. As opposed to the usual self-centered tactics you use when you’re playing for yourself, imagine, he said, playing in a Monopoly tournament, where you’re on a team, with teammates playing simultaneously on other boards, and real-estate holdings synced across games: In this set-up, winning would require you to adopt almost entirely different tactics from solo play. You couldn’t play for yourself and expect your team to win. You’d have to cooperate, basing your play on the state of other boards in the tournament. As a result, it’s no coincidence that, when you glance at the list of core design principles for effective groups, the items look commonsensical and moral: We’re social beings, evolved to rely not only on our own wits but on those of others. Ask yourself, if you were on a team, would you want these principles to be firmly in place?

Shannon himself wants to apply this paradigm in his work shaping Shopify’s organizational culture, having been an aficionado of evolutionary thinking after reading books like Consilience: The Unity of Knowledge, by biologist E.O. Wilson. But of course it is a challenge keeping a rapidly expanding business and employee population running effectively while keeping merchants happy with a critical piece of their infrastructure. He took to heart anthropological observations, across various domains, concerning the optimal size of working groups, which usually consist of five to 12 people—think juries, sports teams, military squads. The goal from the beginning, he said, was to “build a 100-year organization,” which meant not feeling beholden to traditional (short-term financial) metrics of business success. For example, he said, “There’s nothing in the physics of capitalism that requires a quarterly focus.” He was told that Shopify’s plan—to have users of its online-store platform profit more than Shopify itself—was unwise. He disagrees. Having Shopify’s users—as well as developers who add features on top of Shopify’s platform—take top profits, his reasoning goes, benefits the ecosystem in which Shopify operates, ensuring the company’s importance and longevity. Shannon said that he championed a sort of evolutionary aphorism: “Selfishness beats altruism within groups, but altruism beats selfishness among or between groups”—a bit of wisdom he took from Consilience.

Cheung said that Theranos actually had some of the core design principles in place, notably the first—strong group identity and a sense of purpose. This is what galvanized investors and the media and so many employees like herself, who cared deeply about patients and wanted to improve their health outcomes along with the cost of healthcare. Theranos’ mission, taken at face value, was a good one, and Cheung was committed to realizing it. But the principles it lacked lead to its undoing—specifically fair and inclusive decision making. “The healthcare portion of the company’s voice wasn’t heard,” she said. When they’d raise issues with the product, or process, they “were siloed, spied on.”

One of the problems that Cheung wants to address is the tendency among startups, as they scale from, say, five to 400 employees in two years, to inadvertently shed their initial identity or culture to the company’s detriment. She asked Wilson how one might harness cultural evolutionary processes to avoid this predicament. He said neither a laissez faire nor a centralized planning approach works. “The experimental process does,” he said. Best practices are often stumbled on by happenstance. It means you have to be evolutionary, iterative, and humble about solutions. His best guess is that, as a company rapidly scales, it has to add structure—formalize the aspects of its culture it wants to keep—to stay the same. “Being mindful of that is part of the solution,” he said. “Left unmanaged, evolution will take us where we don’t want to go.”

Social psychologist Jonathan Haidt, Ethical Systems’ founder, who was moderating the discussion, picked up on that thread. “Ethical systems wasn’t founded on evolutionary ideas,” he said, “but it’s been implicit in our experimental ethos.” For a business’ culture to be guided or informed by behavioral science means being willing, even eager, to try new things.