Sidetracked: Why Our Decisions Get Derailed, and How We Can Stick to the Plan
by Francesca Gino
Harvard Business Review Press (2013) (public library)
Summarized by Jennifer Fang The adage “the best laid plans of mice and men often go awry” succinctly summarizes the difficulties of executing even the most well conceived plans. Sidetracked investigates and identifies nine significant factors that can lead us astray when trying to achieve our goals. Francesca Gino draws upon her numerous research projects on judgment and decision making, social influence, and ethics as well as her personal experiences to compile a list of factors that can derail almost any plan. She divides the lists into three large components: personal, interpersonal, and environmental; and shows how each group can affect us in surreptitious ways. Gino is a professor at Harvard Business School and a collaborator at EthicalSystems.org.

As companies try to implement changes – any changes, including those that would improve their ethical climate – they can expect problems along the way. In Sidetracked, Gino examines three sets of problems that often prevent companies from achieving their goals, and she provides suggestions for overcoming them. The first insight is to be aware of irrelevant information, Gino cautions users against relying too heavily on biased or incomplete information. The second is to be flexible to subtle changes in framing, as how we structure risk and rewards could affect our decisions. The last is to be aware of the ambience and opportunity, as the immediate surroundings can have a large impact on our actions. In one practical and insightful experiment, Gino asked auto-owners to fill out the odometer readings on a self-reported insurance form; the owners were incentivized to report lower mileages, as it leads to lower insurance rates. Gino used two forms: one with an honesty pledge at top of the form, the other with the honesty pledge at the bottom. The owners who had to sign the honesty pledge before reporting the mileage (as the pledge is on top) reported 10% higher mileage than the other group. Examples such as this shows how subtle and simple tweaks can help companies better motivate their customers and clients towards more moral choices.

Section 1: Forces from Within

In the first three chapters of the book, Gino investigates the personal aspects (forces from within) that can lead us away from our intended goals. The first chapter focuses on inaccurate views of ourselves, or more specifically, the fact that we tend to overestimate or underestimate our capabilities in different situations. Most people tend to have a more favorable view of themselves and their abilities and place higher value on their own opinions – this is especially true for more commonplace activities and decisions. However, if the decisions involve more complex and ambiguous conditions, people tend to become more reliant on others’ advice. Gino advocates that we examine our own biases and track the outcome of our decisions more carefully to get a better sense of our decision-making skills. One pertinent implications of this for companies is how to structure their decision-making teams. Eli Lilly’s pharmaceutical R&D team realized that scientists conducting research are generally overly optimistic about the results of their drugs, and thus added evaluations from experts who were not personally involved in these projects to make more realistic projections.

The second chapter of the book investigates how emotions can affect our decision-making process. While we can predict and practice for any particular situation, our actual emotions during that event can waylay us. In fact, our emotions can spillover from one situation to another and can surreptitiously affect our actions. Emotions can also drastically alter how we perceive and evaluate our options and situation. Hence, it is important to examine the emotions when making important decisions. One corporate takeaway for this is: previously Ducati’s design team incorporated many suggestions from riders when tweaking the designs on its racing motorcycles. However, after a couple changes that worsened the design, the design team realized that it needed to take the rider’s emotional state into account when evaluating his/her suggestions.

As a part of human nature, we sometimes miss crucial information because we are too narrowly focused. In the phenomenon known as inattentional blindness, we can easily miss unanticipated information when we are focused solely on a target. Another phenomenon is change blindness, in which we easily miss small changes, even as they pile up. In addition, when we interact with others, we tend to overestimate how much the information that only we have access to will influence the opinion of others, and underestimate how our constraints will affect others. Gino suggests that when making important decisions, we should zoom out for a more comprehensive understanding of the situation. For example, when Eureko was involved in international litigation with Poland, its focus was mainly on winning the lawsuit and getting back its investment of Eur 700mm. When the new CEO, Gerard van Olphen, took office, he helped the board to realize that winning the lawsuit doesn’t mean the Polish government will honor the decision and pay Eureko. Therefore the company halted the litigation and worked together with the Polish government, and later received Eur 4.2 billion for their investment.

Section 2: Forces from Our Relationships

Chapter 4: How to Draw an E on Your Forehead

The second section of the book focuses on factors from our relationships that can derail us from our intended goals. Due to a lack of time, attention, or motivation, many of us fail to consider the feelings and emotions from another person’s perspective. As many of our goals need the help or input from others, by failing to consider their perspective, we could be unintentionally impeding our progress. Hence, before we start executing our plans, it’s would be wise to think about how others would view it.

Chapter 5: The Curse of the Gray T-Shirt

We are influenced everyday by a variety of factors of which we are not cognizant – a main one is that our behaviors are subconsciously influenced by the behaviors of those to whom we feel connected. Through a series of research studies, Gino and her fellow researchers have found that people are more likely to engage in dishonest and unethical behavior if they feel like others are also engaging in that type of behavior (especially if there is a connection between the two people). Therefore, it’s important to examine the associations that we form, so that we do not get unconsciously led astray.

Chapter 6: The Power of Stickers

As humans, we tend to define ourselves through social comparisons. Not only are our behaviors influenced by the behaviors of those around us (as mentioned in the previous chapter), we also actively compare ourselves to them to get a better sense of our goals. At times, our comparisons affect our emotions, which can lead us away from the original goal. In one study, Gino showed that the participants intended to judge others more harshly if the participants were perceived as wealthy. In other words, the participants let their social comparison influence their action. Hence, it’s important to examine the motivation behind our decisions, and see whether or not it’s derived from our original intent or from comparisons to others.

Section 3: Forces from Outside:

Chapter 7: They’re Not as Dumb as You Think They Are

The next 3 chapters investigate the situational factors that could derail our progress. The first significant factor is to consider the quality of the information off of which one’s decisions are based. There are several types of bias; the first is the correspondence bias, which is when we fail to account for the difference in the informational sources. For example, if one person took an easier exam and scored higher than another person taking a harder exam, people tend to judge the person taking the easier exam as more knowledgeable (despite the fact that they know that the test is easier). The second bias is the input bias, were our judgments are influenced by the input of a situation. For example, a piece of work is judged to be better when we hear that the creator labored over it for a long time. The third bias is the output bias, where our judgments are influenced by the outcome of a situation; for example, we are more forgiving of risky operations if the results are positive. All these bias show the tendency to focus on irrelevant information when making a decision. To combat this, it’s important to distinguish the sources of information that are used. For companies, this is especially important when constructing the compensation structure, so that employees are not incentivized to be counterproductive.

Chapter 8: Traveling to Europe on Pudding

The second situational factor that could impede (or aid) progress is the framing of a situation. How information (potential reward, incentives, and choices) is presented and perceived can drastically alter the outcome and decisions. In addition, framing can also influence our motivation to accomplish our stated goals. Hence, be careful and thoughtful when framing situations to avoid becoming unduly influence. One valuable takeaway for businesses is a study conducted by Gino, showing that companies retain more employees when framing themselves as concerned about the growth of their employees during orientation. An one-hour orientation that focused on the new employees resulted in an reduction of 250% in employee turnover.

While this chapter continues the theme of how situational factors can influence our actions, it specifically focuses on certain factors that influence our moral standards negatively. For example, darkness or even perceived darkness (such as wearing sunglasses) causes people to feel more anonymous and thereby increases the chance of immoral/unjust behavior. Rationalization is a powerful tool that allows us to view ourselves in positive light despite our poor behaviors. To combat this, one method is to keep our principles salient in our minds, especially when we are sorely tempted. Another method is to discuss our moral standards more frequently so that the standards are fresh in our minds.

Conclusion: Sticking to the Plan

It is important to recognize the strengths and weaknesses of our minds in order to progress with our goals. By examining our biases and external influences, we are able to implement our plans and avoid the pitfalls that often derail us. 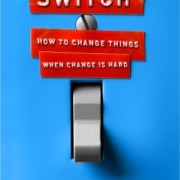 Switch: How to Change Things When Change Is Hard

Behavioral ethics and compliance: what the board of directors should ask