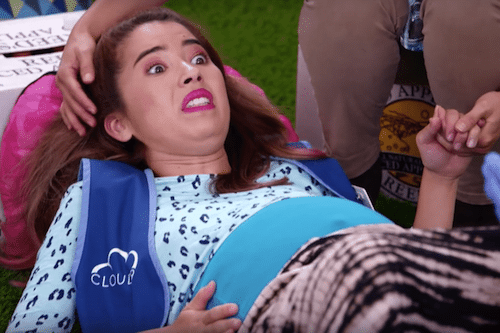 In an episode of NBC’s sitcom Superstore, Cheyenne, a teenage associate at a Walmart-like retail giant called Cloud-9, goes into labor on the store floor. Coworkers rush for medical supplies as customers spectate out of curiosity and boredom. Cheyanne’s at work so late in her pregnancy because her employer doesn’t offer paid maternity leave—she can’t afford to miss a paycheck. A send-up of bureaucratic mores ensues when Amy, the floor supervisor, and Jonah, another associate, call corporate: Is changing maternity leave policy part of any conversation there, Jonah asks, since “other big companies do offer it? Typically their employees would be in unions—” Cut off, he’s told, “You’re being transferred.” Employee Relations gets on the line, then Legal. Finally, on a high-level conference call, they’re ominously told someone will be coming to their store tomorrow. The Cloud-9 employees look at each other and realize they may have botched their approach.

What should Amy and Jonah have done to push paid maternity leave? It is an interesting question to consider in light of the fact that the real-world Cloud-9, Walmart, decided, only last year, to expand parental leave. What was the company’s rationale? Walmart told Harvard Business Review that it acted out of enlightened self-interest: investing in associates causes them to, in turn, invest in their work, a senior vice president said. Having a stable home life, due to leave pay, boosts work performance and dedication. In fact, a 2014 report found that, whether it’s paid or not, leave “can have a positive effect on long-term productivity by improving recruitment, retention, and employee motivation.” A 2011 report on the effects of paid leave in California found that, for most employers, productivity, profitability/performance, turnover, and employee morale were either positively or not noticeably affected.

Then again, Walmart was apparently under some amount of pressure to make some changes. Before the company introduced the new parental leave policy, employees and activists had been hankering for paid leave for around a year, a petition for better treatment was signed by over 20,000 Walmart employees, and a shareholder submitted a resolution calling for paid leave a month before Walmart introduced it. Perhaps not having such a policy was beginning to be a bad look.

“There’s starting to be brand risk for being a company that doesn’t support family leave,” Katie Bethell, Founder & Executive Director of lobbying group Paid Leave for the United States, told Harvard Business Review. “There’s gender discrimination risk if you’re only offering it to women and not to men, or if you’re undermining women’s ability to succeed in your company.” Bethell suggested that Walmart may have added the paid leave policy because of a combination of factors, including the persistence of employees, strong proposals for change rather than complaints about the status quo, and compelling stories of particular employees hurt by the lack of the policy.

So, appealing to a combination of corporate interests seems wise. But what should employees like Amy and Jonah emphasize when they advocate for social issues at work? The righteousness of the cause. A recent study found that moral language, as opposed to business or economic language, is more effective for selling social issues. This is contrary to what many employees who want to push social issues think will work. The researchers, led by David Mayer, a psychologist and Ethical Systems collaborator, point out that past conceptual and empirical studies show a “consistent conclusion that issue sellers’ choices reflect a belief that they will be most effective in influencing management when they utilize economic language to make a persuasive appeal.” Mayer’s findings suggest that belief needs reform.

Mayer and his colleagues analyzed responses to surveys adult workers filled out for the study. One survey asked workers from a variety of organizations whether they had ever advocated for a social issue before, how they went about doing it (using a moral or economic argument), and whether the superior they were pitching the idea to found it convincing. The researchers also wanted to know whether workers argued that their proposed change would fit well with the values of the organization.

The responses showed a strong link between moral language and fit—making the ethics case was more effective for employees when they also argued that the change would jive with the company’s mission. An analysis of another survey of a different group of workers—employees and managers at the international nonprofit World Business Alliance—replicated this result, accounting for potential bias in the prior responses. It also found that using moral language could backfire if employees don’t draw links to their organization’s values. This might happen, Mayer says, because “it highlights the irrelevance of the issue to the organization’s core agenda.” An experiment—tasking participants randomly assigned to read and respond to one of four vignettes (moral language vs. economic language) x (fit vs. no fit)—also replicated the researchers’ survey results.

“These findings are important because they suggest that issue sellers who want to be authentic in their appeals (i.e., talking about the moral reason for why the issue should be addressed) are able to do so without negatively impacting their ability to effectively influence their supervisor provided they couch it in terms of the company’s values and mission,” Mayer and his colleagues wrote. What’s more, “organizations that want to foster an issue selling friendly environment might want to highlight their organizational values more strongly.” That’d be a boon to employees looking to improve things—they don’t have to guess whether their higher-ups are going to care. “When the organization’s mission and values are more salient to employees,” the researchers wrote, “it makes it easier for employees to consider how they might use moral arguments to sell their issue of interest.”

Cloud-9, mirroring Walmart, eventually implemented maternity leave for (some of) its employees. Walmart offers it to only full-time workers, and Cloud-9 only offers it to employees who have worked for the company for more than a year. But that policy has exceptions. In “Maternity Leave,” an episode from the fourth season of Superstore, which aired this year, Amy has just given birth and gets called in to work. Amy’s a 15-year employee, but it turns out that, after she and Jonah got suspended for having sex at work—a tornado was apparently going to destroy the store and kill them—her tenure turned back to zero. “I can’t believe you have to be here two days after having a baby,” Jonah tells Amy, when she goes in. “It’s indicative of the disdain our culture has for working mothers.” Amy could echo the sentiment but, understandably, doesn’t have the energy. “I’m exhausted and sore and hormonal, and I’m wearing pajamas, and I’m just a mess.”