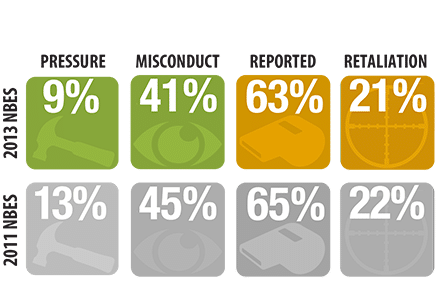 On February 4 the Ethics Resource Center released the latest National Business Ethics Survey (NBES). Sampling over 6,400 workers across the country, the report found that 41% of those surveyed said they have observed misconduct on the job, down from 55% in 2007. Pressure to compromise standards also fell to 9% from 13% in 2011. Additionally, the percentage of companies with “strong” or “strong-leaning” ethics cultures climbed to 66%, the percentage providing ethics training rose to 81%, and 67% included ethical conduct as a performance measure in employee evaluations.

NBES 2013 includes detailed investigation into several types of misconduct, the factors that increase reporting of misconduct, and the implications of whistleblower retaliation. While the general thrust of the report is positive, there is still much work to be done: workers said that 60% of misconduct involved someone with managerial authority, and 26% of misconduct is ongoing. Furthermore, retaliation against workers who reported misconduct (21%) did not fall significantly from its record high in 2011 (22%).

We are encouraged by what the NBES describes as the “steady and sharp drop in misconduct since 2007.” Over the last 13 years, and especially since the global finance crisis, the ethical crashes of businesses have garnered increasing media coverage and public attention. Concomitantly, there has been a great deal of interest in ways to improve the ethical climate of business, including risk management, culture transformation, and MBA education. EthicalSystems.org is about supporting this national trend. By aggregating cutting edge scientific research and the best resources for managers and educators alike, we hope to make it ever easier for current and future business leaders to adopt the approach of ethical systems design.

Are you keeping track of your compliance costs?

Lapsed Priorities: New Survey reveals lack of focus on bribery and corruption
Research on the Giving Voice to Values curriculumWeek That Was in Ethical Systems, 2/3-2/9
Scroll to top