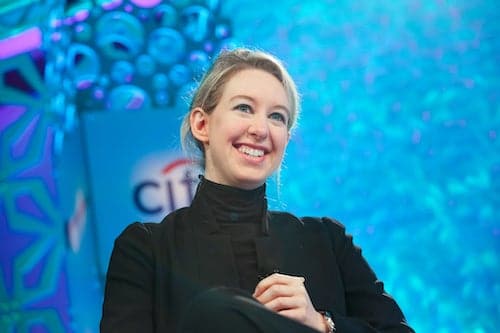 The parable of Elizabeth Holmes and her company, Theranos, is not an unfamiliar one. It involves a dream, a mission, a plan, a vision and quite possibly monumental corruption. It’s unclear whether Theranos’ rise and fall will turn out to be a dazzling mirage of “would-be” business greatness, one of the most infamous stories of corporate fraud in the 21st century, or, an ironic reminder of the inescapable weakness of biased decision-making. What we know for certain is that behind this particular corporate failure lies a cautionary tale of boundless visioning that all investors, entrepreneurs and organizations seeking breakthrough innovations should be interested in further understanding.

From Belief to Make Believe

Next to a perfectly dosed narrative of black turtlenecks, sprawling office facilities, glossy paper spreads and alluring marketing campaigns, the supposed Apple look-alike of the health technology industry tantalized investors and consumers with its mission, “to facilitate the early detection and prevention of disease and empower people everywhere to live their best possible lives.” It’s no surprise that many bought into it. Theranos represented a potential disruptor to costly and quasi-monopolistic healthcare players that would help people get the right cure at the right time.

Elizabeth Holmes’ blue eyes and baritone voice, her, albeit incomplete, Stanford credentials and well-crafted life narrative were the perfect exterior to a dream-come-true vision of a better future for millions of people. A young (age-defying), pure-looking (evil-defying), masculine-sounding (stereotype-defying) female CEO speaking about Theranos’ unfulfilled feats in the present or past present tense, Holmes’ proposition was so enticing that she was able to assemble one of the most impressive boards in corporate America.

The boundless part of her visioning deserves extra attention. After all, one of Theranos’ top achievements was the very idea Holmes herself had developed—an idea she never put through the rigor of scientific testing before defining its contours. And although entrepreneurship is very much about turning an imagined future state into reality, the vast and unchecked gap between Theranos’ vision and the technological incompetence of its operations was breathtaking. Surprisingly, few paid much attention to that unchecked gap before the truth began to come out.

There are at least four biases that can let a belief about a desired future state shape reality despite its disconnectedness from reality. Those biases can be understood as the blindness brought about by what seems preeminently important, the righteousness generated by what sounds inherently right, the operational myopia triggered by what is situated far away from us and the sense of potency derived from endeavoring to create something new. Theranos’ gambit may have extended over time precisely because all four biases played a role in the making of a dream that was never fully tested against the constraints of reality. Bundled together, these biases not only warped Holmes’ sense of truth, but they likely slanted the perspective of key stakeholders who were attracted to the many promises made by Theranos.

The Narrowness Of A Boundless Vision

A vision and its attached goals may inspire and motivate, but they can also severely contrive our ability to consider a broader set of possibilities or address contradictory information. Having a vested interest in what is at stake—as is often the case with founders and investors—and envisioning the desired end state via inflexible goals may create a condition known as motivated blindness that can paradoxically prevent us from making realistic progress. Consider Elizabeth Holmes’ obsession with producing as small a micro-Lab as possible or with using just a few drops of blood in order to conduct the myriad of tests Theranos promised.

Though highly desirable, these significant features were not as instrumental in the fulfillment of Theranos’ vision as they were initially pledged. Instead of sticking with them, Holmes and her team could have put an equal amount of energy and ingenuity into developing a safe user-friendly technique to draw the adequate amount of blood necessary. That innovation combined with the use of technology to build a somewhat bulkier—though still miniature and portable—yet more reliable version of the micro-Lab would have provided plenty of opportunity to make strides towards the dream of empowering people with reliable, timely and inexpensive blood testing.

Instead, a vision made boundless by its sharp divide from reality and its extraordinarily narrow goals ended up only perpetuating a state of motivated blindness. In his book Bad Blood, John Carreyrou documented accounts describing Elizabeth Holmes’ unwillingness to revise the original micro-Lab specs and her reported tendency to shut off whoever tried to provide realistic feedback or solutions to the technical problems Theranos was facing. These detailed accounts show a pattern of behaviors consistent with a distorted motivational and cognitive state.

If It Serves Good, It Cannot Be Wrong

It was not only motivated blindness that may have triggered the slippery slope of unethical conduct at Theranos. The alleged fraud, which Holmes perpetrated as the company’s founder and CEO, may have felt less onerous due to the goodness of the vision and mission she championed. In the end, the innovations Theranos was after were not only meant for its own success but to secure a better future for millions of people. Research shows that unethical conduct is more likely when people are tempted with the opportunity to cheat on behalf of a good cause, and that cheaters may feel more at ease with their own behavior if they cheat on behalf of the common good.

The effects of cheating in the service of good are not only treacherous for those who cheat, but also for those who interact and deal with the cheaters. Since this form of unethical behavior may lack the pangs of guilt and/or shame that generally provide people with a certain amount of self-restraint and hesitation, it can be difficult for others to suspect any bad conduct. Holmes’ unflappability may have made it difficult for Theranos’ board members and prospective clients to raise or press on with the right questions at the right time. And while some have observed that her behavior showed various sociopathic tendencies, the relaxed aura that cheating in the service of a larger cause may afford the average person may amp up ethical risk far more than the risk posed by sociopathic individuals.

Entrepreneurship lives in the realm of threading between the present and the future. But constantly focusing on a desired future state may have the effect of giving extra highlight to the positives of a distant vision at the expense of the operational challenges that are taking place in the here and now. According to Temporal Construal Theory, a compelling, unfulfilled mission can trigger this type of operational myopia. Paradoxically, instead of warranting greater scrutiny, the very gap between Theranos’ projected solution and the requirements of the available blood-testing technology may have prevented a number of decision-makers from focusing on practical questions during evaluation of the company’s potential and its various promises.

Carreyou’s account of Safeway’s engagement with Theranos is powerful. The fact that key stakeholders at Safeway remained “upbeat” despite the arrogant and secretive behaviors of Theranos’ executives and the lack of any real hard proof associated with many of the claims Theranos was making is extremely revealing. The far-reaching nature of Theranos’ promises pulled stakeholders’ attention towards the end state rather than the more practical and operational nature of the challenges that needed consideration in order to successfully implement the purported technological approach. In fact, those challenges dwarfed in relation to the potential benefits of the vision the tech company eagerly shared with those with whom it wished to partner.

The Miracles of Creation

Theranos stood as the next big breakthrough innovator in the healthcare industry offering an affirming achievement of the value of human ingenuity. The engrossing optimism that this may have generated in its founder, Elizabeth Holmes, and other champions of the company’s vision is understandable. But what may be less intuitive is the effect that such optimism likely had on the ability of the company’s senior leadership to consider the implications of their decisions and following actions.

Creating something new is about breaking the status quo. This is why accounts about Theranos’ willingness to circumvent FDA rules and requirements, among other things, or legitimate due diligence requests made by potential clients is disconcerting yet unsurprising. Research on the dark sides of creativity suggests that not only are people more likely to act dishonestly when they are in a creative state, but that cheating, in itself, can actually make people more creative.

Cultivating a boundless vision until the very end—completely untethered from the status quo, rules, requirements and the demands of the here and now—Holmes and Theranos were on a special kind of journey. That journey ended not, as it could have been, when the promises of its vision delivered their potential, but it ended when somebody, finally, brought reality into the picture.

Caterina Bulgarella is a culture architect. She is the co-founder of Be Thread, a platform of tools for human-centric work environments, an SAI Global influencer, and an Ethical Systems lead contributor.

This post was originally published on Forbes in April 2019 and was reprinted with permission.