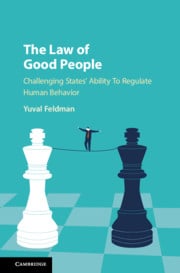 When Yuval Feldman arrived at U.C. Berkeley in 1999 to earn his PhD, he was intent on studying the connections between psychology, economics and law.

“During my undergraduate studies I came to realize how relevant psychology is to almost all areas of law. Since no one worked on this interaction academically in Israel, I went to pursue my PhD in the U.S.,” said Feldman, now the Mori Lazarof professor of legal research at Bar-Ilan University’s law school and a senior research fellow at the Israeli Institute of Democracy.

In 2004 Feldman not only completed his dissertation – studying Silicon Valley engineers in the context of trade secret divulgence and the gap between law and social norms – but has continued to research the topic of non-compliance in areas that address many other legal doctrines such as IP law, environmental law, administrative law and contract law.

The book is the product of more than 15 years of research on compliance and ethical behavior where Feldman questions the effectiveness of law enforcement, which often is designed to regulate “bad people,” in light of behavioral ethics research demonstrating that the majority of us are “good people.” The “good people” research shows that most individuals, based on a combination of systematic biases and rationalizations, fail to recognize accurately the moral and legal meaning of their own behavior.

Feldman said the research between psychology and law has gained momentum, and the field – now known as behavioral economics – has expanded.

Feldman said the book “Nudge,” by Richard Thaler and Cass Sunstein, had a huge influence on the of development of the interaction between behavioral economics and policy making. But for the most part, it doesn’t address ethics and justice, something that Feldman said his new book attempts to change.

In October Feldman starts a whirlwind book tour and visit in the U.S. to discuss “The Law of Good People.”

On Oct. 10 Feldman will share more about the book at NYU’s Stern School of Business with Ron Berenbeim Ethical Systems Collaborator and an adjunct professor at NYU who will lead the discussion.

Feldman recently took time to share more about what prompted him to write the book, and the ideas behind it with Ethical Systems’ Amy Wu. Here are some excerpts from the interview.

Q: What is the main message you want to convey to readers?
A: There are several key messages; there is a high prevalence of ordinary unethicality in society, and despite its enormous effect on our life, it is being neglected because the legal system focuses too much on smoking guns and gross violations of the law.

Policy makers need to recognize that “good” people want to behave in a way which allows them to feel good about themselves without paying too big of a price for their compliance. People create their own red lines with regard to compliance through a combination of deliberative and non-deliberative self-serving mechanisms, which enables them to feel okay about violating laws in many important contexts.

Q: Overall are you pessimistic or optimistic about the ethicality of human nature?

A: Behavioral ethics is by and large a pessimistic field. The proportion of people who behave unethically, and their tendency towards self-deception is alarming. It is easier to isolate and treat the bad apples than to recognize that there is such a big proportion of wrong doers. It creates a much greater challenge for the legal policy makers.

Q: If you were in charge of creating legal rules that govern white collar crime, what changes would you have made?

A: The threat of sanction can deter potential wrongdoers only if the people it targets understand, or at least could be prompted to reflect and understand, that they are acting badly. If someone doesn’t think that she is corrupt, or has the capacity to be one of the “bad people,” increasing the penalties on non-compliance might not be relevant for her. Sanctions should be designed with a focus on their saliency and relevancy to people’s understanding of their own misconduct. In addition, laws should put greater emphasis on ex-ante design rather than ex-post allocation of liability.

Q:  How is the research relevant specifically to corporations and businesses today?

A: Corporate managers should be held accountable for the impact they have on the ethical behaviors of their employees. Incentive schemes and ambiguous corporate regulations are just two ways through which they might undermine the ethicality of their employees.  They should understand that the full potential of the regulatory tool box to affect their employee’s ethical behavior and attempt to find the best combination of intervention, which will target employees with different levels of awareness and motivation to comply with organizational rules.

Q: What role do you think that social norms play in explaining unethical behavior and how can legal policy makers use them?

A:  One of the main mechanisms that explains how good people could feel moral while still violating the law is related to social norms. In most cases, people don’t look to the law to know how to behave. They instead look around them and see how others behave in similar situations. Since unethical behavior is more vivid and salient, people are likely to over-estimate the prevalence of unethical behavior of their peers.

Q: What are some realistic solutions that can improve decision making which don’t require changing the law?

A: One obvious solution is nudges, which attempt to change the ethical behavior of people through situational design, reminders and clarifications. Ethical nudges are gaining more and more popularity in the corporate world, but as I discuss in the book, relative to the regular nudges, ethical nudges, are less likely to succeed in the long run.

Furthermore, we need to understand the trade-offs between the nudge approach and classical approaches. In law there are many important values that we might want people to implement. For example, even if we can through blind hiring practices cause companies to hire more minorities, don’t we want people to also understand the advantages of diversity? Just leading to a behavioral change without changing the minds of the public might undermine the ability to achieve long terms behavioral changes.

Q: Where can you be found when you aren’t in the classroom or on the road?
A: I enjoy spending time with my family; my wife is a computer science professor at Tel-Aviv university and we have 5 kids, four girls and a boy (19,17,13,10,5).

If you have a suggestion or nomination for “Scholar Spotlight” please e-mail editor amy@ethicalsystems.org

Don’t quit, not just yet
Scroll to top