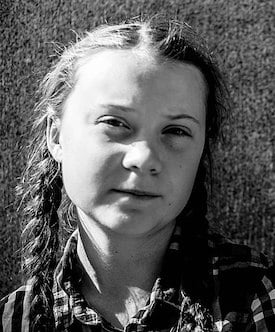 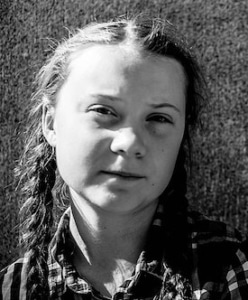 When President Trump made an impromptu appearance at the United Nations at the same time Greta Thunberg was visiting the assembly of international dignitaries, it was almost as if they were meant to meet in person. But they did not. After sailing across the Atlantic, the young activist had come to deliver a scathing rebuke of the meager commitment nations and governments have shown to the pressing challenge of climate change. Trump, for his part, did not respond to Thunberg’s remarks directly, but later took to Twitter jesting about her youth.

The former U.S. President took a different approach. Not only did Barack Obama meet Thunberg in person during her visit to the U.S., Obama and Thunberg released a video documenting their meeting. He was quick to note, upon greeting her, how she was changing the world, and underscored the collegial effort that confronting climate change requires. Inviting her to fist-bump, he said, “You and I are a team.”

Thunberg’s interactions with the two U.S. Presidents illuminate how leadership can achieve very different goals and outcomes. It can empower, develop, and harness talent to solve big problems as well as strengthen the identity of a group and the its social order.

The fact that autocratic leaders exercise power in a top-down fashion is probably what is most prominent about their leadership. It may be an ineluctable part of the job for a leader to tell a direct report “You are fired!,” but to do so with haughty self-assuredness underscores more than power. It reinforces the principle that who is at the helm is the only one who knows what is good for the group and what, therefore, must be done at every turn. At the core of this leadership approach is the idea that, irrespective of technical expertise and information at hand, a leader not only knows best but also what is needed to preserve greatness.

Autocratic leaders will set priorities and make decisions without seeking advice from group members, and in so doing they will not tolerate most challenges to their decision-making. These leaders may tend to dole out disruptive commands to the group. And they will likely impart unhelpful criticism and personal approval in lieu of constructive feedback. At the same time, the group seeks the leader’s guidance to get structure around tasks and plans as well as to boost its own identity and standing. The group needs the leader to ensure the survival of its social status.

Take the way in which Trump addressed Thunberg after her reprisal of political leaders at the U.N. Both Thunberg’s stance and attitude raised eyebrows across part of the public. And while some of the criticism may have been triggered by a difference of opinions, her defiant activism seems to have touched a deeper chord, especially among Trump’s supporters. For a teenager to address world leaders in irreverent terms and to hold them publicly accountable is an act of disobedience that seems to ridicule the very principles of leadership according to the autocratic playbook.

In choosing to mock Thunberg rather than engage in a dialogue with her, Trump did precisely what an autocratic leader should do: He dismissed her, at the same time, helped those in his cohort explain her behavior as a form of juvenile hysteria. The President asserted his authority and reassured his followers that climate change is not a real crisis, doing nothing to advance the conversation or tackle the underlying problem.

Conversely, an empowering leader shares power in a more participatory way, aiming to increase group members’ autonomy as well as their sense of responsibility and ownership. To this end, the leader may share information, seek people’s input and ideas, free them to explore problems and solutions, and facilitate collaboration. Underscoring this type of leadership is the idea that the greatness of the group depends on the group’s collective performance, not only the knowledge, experience, or gut feelings of the leader.

An empowering leader can be invaluable in the face of complex challenges, like climate change—that is, problems that entail dilemmas or trade-offs in which the behavior of every stakeholder is likely to affect the outcomes and survival of all the other stakeholders. In these situations, the leader neither has all the answers nor can come up with them alone. Instead, the long-term performance of the group is ultimately dependent on each group member playing a constructive, collaborative role.

It’s easy to see how Obama’s interaction with Thunberg evoked empowering leadership: Not only did he recognize her role as a change-maker, but he acknowledged the importance of continuing to work together, as a team, to solve the complex issue of climate change. That is, he shared a piece of his power with her, sought her input, and laid the foundation for future collaboration.

The two types of leadership, autocratic and empowering, have implications for the ethical culture of groups and their overall evolutionary chances. A strong ethical culture presupposes a sense of ethical ownership among group members. People must feel somewhat responsible not only for their personal interest but also for the group’s best interest, and not only with respect to gains or performance in the short-term but also with respect to the larger question of what doing the right thing ultimately means. Ethical ownership is hard, and it requires constant practice.

By default, an autocrat will do little to advance ethical ownership, as people will wait for guidance even with respect to ethical matters. This is why, in fostering obedience rather than ownership, autocrats may even provide cover for unethical behavior. In a famous experiment—Milgram’s study—participants who were asked to blindly follow the instructions of a scientist/doctor ended up administering what they believed to be deadly shocks to subjects with a heart condition. These people knew better until they started deferring to the leader.

In contrast, empowering leaders, which aim to foster group members’ sense of responsibility and psychological ownership, are better positioned to also bring about a sense of ethical ownership, even when their moral lens is implicit. Because this leadership approach tries to strengthen both individual responsibility and collaborative behavior, it encourages all group members, including the leader, to forego a piece of personal interest in the name of the group’s best interest.

This very practice is, indeed, one of the ways in which groups can learn to do the right thing and advance their evolutionary resilience. It’s never the group that’s focused on individual performance that does best over the long term, but the group that has evolved the most effective collaborative behaviors. Leadership, as in the case of coordinating efforts to combat climate change, will be critical not only to establish what outcome is more important (for example, group identity versus group survival) but also to facilitate dialogue across adversarial groups, like climate change activists and deniers. Thunberg was speaking to both Presidents, but so far only one has heard her.

Caterina Bulgarella is a culture architect. She is the co-founder of Be Thread, a platform of tools for human-centric work environments, an SAI Global influencer, and an Ethical Systems lead contributor.

Can Business Schools Have Ethical Cultures, Too?
Scroll to top