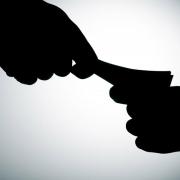 Like dancing the tango, a bribe requires two people for it to be successful. Current governmental policies reward whistle blowers and punish the party who offered the bribe- in other words, reactive punishments are commonplace. But what if governments instituted proactive policies that obviated unethical behavior and made bribes more trouble than they are worth?

There are a wealth of studies and research on EthicalSystems.org that already show how systems interventions can change relationships and alter behavior. In countries where bribes are an integral part of navigating bureaucracy, viewed as a means to an end, governments must do more than look the other way and pretend that bribes are just a necessary cost of doing business.

In the November 2014 issue of the Review of Law & Economics, an article by Robert D. Cooter of UC-Berkeley and Nuno Garoupa of the University of Illinois-Champaign outlines a new proposal for governments to reduce incidents of bribery and corruption and influence more ethical behavior.

From the piece: “In a cooperative crime with two criminals, the state should offer amnesty and a bounty to the criminal who first secures punishment of the other criminal. When the bounty exceeds the bribe, a bribed official gains less from keeping the bribe than from confessing and receiving the bounty. Consequently the person who pays the bribe cannot trust the person who takes it. The game’s unique equilibrium is non-cooperative and bribes disappear.”

The relationship between the briber and the bribee now becomes one fraught with tension and distrust. Essentially, it replaces confidence with cautiousness and reduces the likelihood that people would offer or accept a bribe.

Recently, the World Bank issued a report entitled “Mind, Society, and Behavior” that outlined how governments can nudge people to make more ethical decisions by introducing low-cost, high-yield strategies. Cooter and Garoupa’s paper builds on this by demonstrating that when you shake up the system by incentivizing more ethical behavior, people tend to behave more ethically. Inserting a hurdle creates a pause; within that pause actions are halted, thoughts are changed and more desired outcomes are achieved.

Implementing policies like these benefit everyone, not just those who are in the position to offer and accept bribes by making their work adhere to existing regulations. A reduction in bribery creates more public trust in governmental systems and people. This in turn encourages participation and usage of services and programs. With less bribery comes more available revenue for governments to expand resources aimed at alleviating hardship, reduce taxes, improve infrastructure and so forth. The increase in funds is a rising tide that lifts all ships.

Cooperative crimes, like bribery, are a major hurdle for governments across the globe. Through thoughtful, and often fairly simple, steps there exists the opportunity to help citizens stay on a path of legality and incorruptibility. Even with two left feet, it is a dance everyone can learn.