U.S. airlines have recently hit some ethical turbulence, beginning last month when United Airlines personnel physically dragged a passenger from an overbooked flight and culminating last week when a “near riot” broke out in Fort Lauderdale after Spirit Airlines canceled 11 flights during a labor dispute with its pilots. The public has become increasingly critical of air travel.

Yet the business community seems to disincentivize airlines from pursuing a more ethics-forward approach. When American Airlines gave pay raises to its pilots and flight attendants ahead of contract negotiations, Wall Street analysts complained about the prioritization of labor over shareholders and exacted punishment on AAL’s stock price. The flight attendants’ union countered with a petition pointing out that shareholders have received ample compensation over the last three years.

The shareholder value model (e.g., Rappaport, 1986), which posits that corporate strategy should revolve around increasing investor returns, began to gain steam in the 1980s, encouraging malfeasant earnings management practices that led to numerous corporate scandals such as Enron’s infamous bankruptcy in 2001 (Dobbin & Zorn, 2005). But even in its infancy, the shareholder value model was challenged by stakeholder theory, which takes into account all parties with a stake in the firm, including customers, suppliers, owners, managers, employees, and even communities (Freeman, 1984).

In short, stakeholder theory presents an opportunity to infuse business analysis with ethical standards (Freeman, 2015). Nevertheless, shareholder value retains a tenacious hold on the minds of investors. At Ethical Systems, we contend that these two approaches should go hand in hand, because good ethics is good for business. In fact, there is evidence that shareholder value is improved by bettering relationships with primary stakeholders (Hillman & Keim, 2001) and may be positively influenced by customer satisfaction (Anderson, Fornell, & Mazvancheryl, 2004). Even CSR activities aimed at secondary stakeholders or society at large may enhance shareholder value by furnishing goodwill and insurance-like protection from negative events (Godfrey, Merrill, & Hansen, 2008).

If U.S. airlines (and corporations generally) wish to improve their long-term value, especially in an increasingly transparent global environment, they could do worse than to take an ethical orientation toward employees, customers, and stakeholders writ broad. 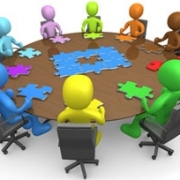 Shareholders vs Stakeholders: Who should companies focus on enriching?
A Long Term Fix for Our Short Term Focus on Corporate Culture and Profits

Our Book Discussion With Jack Ewing and NYU’s Center For Sustainable ...
Scroll to top