Last month, our country marked the one-year anniversary of George Floyd’s brutal murder. It has been a year of intense debate, massive public demonstrations, and considerable introspection about racial injustice and inequality, focused principally on the need to reform policing and the criminal justice system more broadly. Former President Obama captured both the continued frustrations and hopes of many Americans when he wrote, “When injustice runs deep, progress takes time. But if we can turn words into action and action into meaningful reform, we will, in the words of James Baldwin, ‘cease fleeing from reality and begin to change it.’”

A corresponding and closely related reality is the vast and increasing income inequality in our country, with its especially pernicious effect on Black Americans. In general, income inequality has been rising steadily in the United States for the past 50 years. It is higher in the U.S. than in any other developed country—closer to Mexico than to Sweden or Germany. This inequality is widening because most of our considerable economic gains have gone to those already at the top. The pandemic has disproportionately harmed those who are most economically vulnerable and compounded this inequality.

Only then will we “cease fleeing from reality and begin to change it.”

These economic disparities have a disproportionate impact on Black Americans. As Ray Boshara of the St. Louis Federal Reserve Bank and others have documented, these wealth gaps actually have been growing over the last few decades. Between 1992 and 2016, wealth among college-educated white people increased by 96 percent, while Black college graduates saw their wealth fall by 10 percent. In 2016, the net worth of a typical white family was $171,000—nearly 10 times greater than a typical Black family’s net worth of $17,150.

We can see this economic inequality most dramatically at the top. Today there are only five Black CEOs of Fortune 500 companies, down from six in 2012. Throughout our history, there have been fewer than 20 Black men and women running the country’s largest companies. There has been progress in bringing more Black leaders into corporate boardrooms where there are now 322 Black corporate directors in S&P 500 companies. Yet more than a third of these companies still have no Black board members at all. And while many corporate leaders see the glaring absence of Black leaders in the C-suites as a pipeline problem, the news on that front also is not promising. While Black Americans comprise roughly 13 percent of our total population, they hold just 3.3 percent of all executive or senior leadership positions in the largest companies, a number that has remained static for decades.

In two sectors where our economic growth has been most pronounced, investments and technology, the absence of Black leaders is perhaps most striking. Only 2.6 percent of leadership positions at Google and 2.4 percent of the company’s technical workers are Black. At Facebook, Black Americans comprise 3.1 percent of those in leadership roles and 1.5 percent of technical positions. The problem is compounded by dramatic under-representation in the tech investment world. Black investors make up less than 1 percent of partners in venture-capital firms. Many of the leading Silicon Valley investment firms, including Sequoia, Kleiner Perkins, Benchmark, and Greylock, have no Black partners. Unsurprisingly, less than 1 percent of startup founders who receive venture funding are Black.

But in Obama’s words, several leading U.S. companies have begun to “turn words into action” since George Floyd’s murder, announcing major financial commitments to bridge the vast wealth gap and create greater opportunities for Black Americans. In the tech sector, Microsoft and Apple have announced ambitious plans to hire and retain Black employees, and both have committed tens of millions of dollars to support these efforts. Facebook has dedicated $100 million to supporting Black-owned businesses through a mix of grants and free advertising on its platform. The social media company also has committed to directing $100 million in business to Black-owned suppliers. A number of other leading companies like Hilton and Exelon also have made commitments to prioritizing greater diversity among their suppliers.

In October, JPMorgan Chase announced a $30 billion commitment over five years to address the racial wealth gap. The package includes $8 billion for originating tens of thousands of mortgages for Black and Latino households, funding for 100,000 affordable housing units for communities most in need, funds to support thousands of small-business loans to minorities, as well as investments in minority-owned banks, credit unions, and community-development financial institutions.

These and many other unprecedented financial commitments from the largest U.S. corporations are important steps in the right direction, turning words into action. But companies need to do more internally to ensure that these actions evolve into the profound and sustainable reforms that are needed. In addition to investing more money to promote greater racial equity, this will require concerted efforts by corporate leaders to elevate racial inclusion within their own companies and to make racial diversity at every level a key business priority. Real progress will occur only if these commitments are publicly articulated and accompanied by internal benchmarks to measure progress. Only then will we “cease fleeing from reality and begin to change it.” 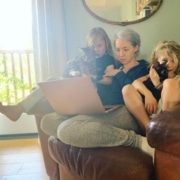 Women Can No Longer Pay for Household Help, and That’s a Problem
An MIT Researcher Watched a Hospital Experiment with Shared Leadership

Courage Is a Competency
Scroll to top