Perhaps my favorite ethics story is when the senior partner of a law firm was confronted by a junior partner about an apparent conflict of interest, and replied, “You’re an ethics expert—find a way around this.”

I thought about this after coming across a recent study in Academy of Management Perspectives. Sunita Sah, an Associate Professor of Management and Organizations at the Johnson Graduate School of Management at Cornell University, describes a paradox of professionalism. “Professionalism is often viewed, in the management literature and in practice, as a desirable sought-after trait in employees and managers,” Sah writes. “This belief, however, does not consider a potential dark side of professionalism. A high self-concept of professionalism often coexists with a shallow notion of the concept and can paradoxically lead to detrimental outcomes, such as greater unethical behavior and increased vulnerability to conflicts of interest.”

Sah believes that humility should play a significant role in promoting ethical behavior.

Her paper details “how workplace policies that rely solely on cultivating intrinsic values at the expense of monitoring and extrinsic controls may fail or have a contrary effect,” and also makes some recommendations. That includes “redefining professionalism as a deeper concept that includes a set of consistently repeated practices rather than a character trait.”

A press release on Sah’s research elaborates her approach:

“Sah surveyed 400 managers on multiple conflict-of-interest scenarios, and asked whether they would accept or reject the gift offered in each circumstance. Participants were further asked to imagine they accepted a gift and to predict the influence, if any, it would have on them. Prior to viewing the scenarios, each respondent’s perception of their own professionalism was measured by assessing their personal view of their ability to remain objective and self-regulate unwanted influence. ‘Consistent with my predictions, the greater the managers’ sense of professionalism, the more likely they were to report that they would accept gifts from people with questionable or ambiguous agendas, and less likely to be influenced by the specific gifts in the scenarios,’ Sah wrote. ‘These overall results indicate that a high sense of professionalism with a shallow understanding of the concept may lead to greater acceptance of conflicts and potentially more bias.’”

Some points that struck me: First, she writes, “The problem of [conflicts of interest] is not always due to deliberate corruption but often arises from unconscious and unintentional bias. Unless professionalism is redefined as a deep concept that includes an understanding of the limits of self-regulation and a set of observable repeated behavioral practices with positive ethical outcomes rather than as an individual characteristic, a high self-concept of professionalism does not protect against unconscious bias and could make matters worse.”

This is a lot to ask for. But it makes sense (to me) and I hope that some companies will seek out practical ways—for instance, through discussion of these ideas in training for senior leaders—to draw from this important knowledge.

Second, the notion of repeated behavioral practice is also key to Sah’s analysis: “As Aristotle emphasized, virtues of character (moral virtues) cannot be taught but must be developed by repeated practice and achieved by means of habit. The repetition of appropriate activities when practiced consistently throughout one’s life results in a state of character, or virtue. …, a deep understanding of professionalism will require both a realistic intellectual understanding of the limits of self-regulation (virtues of thought) and repeated practice (cultivating virtues of character). It requires action—a consistent display of professional behaviors—not just sentiment or feelings of professionalism.”

How one creates the settings for such repeated practice is another matter. But here, too, for at least some companies, there is enough reason to move in this direction.

Finally, Sah believes that humility should play a significant role in promoting ethical behavior. I agree. I believe that—at least for some companies—humility should be a core value, in both word and deed. (I do see this at some companies, but not many.) Humility is a logical and arguably inevitable response to the vast body of behavioral ethics research showing “we are not as ethical as we think.” Thinking and acting with humility is indeed a way of operationalizing behavioral ethics. (For a list of behavioral ethics and compliance posts, click here.)

Humility is also well suited for addressing ethical challenges that are based not on the purposeful failure to be honest but on the less well-appreciated dangers of being careless. Recognizing the limits of one’s abilities—which is part of being humble—should help underscore the need for carefulness. What’s more, humility has the potential to resonate deeply in our political, as well as business, culture. By this I mean humility can help form part of a broader mutually supporting relationship between business ethics and ethics in other realms. It can support relationships of trust, and such relationships can be an essential foundation for prosperity in many ways. 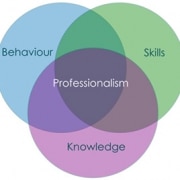 Professionalism and Ethics: A missed connection?
Why Elon Musk Is Going to Be Bad For Twitter