If you want to be known as a legendary start-up founder, you need a good origin story. That you sprung forth from the head of Steve Jobs, maybe—or, if that’s too spectacular in 2021, maybe that you were an awkward orphan that got into, and then dropped out of, Harvard.

If you’re the kind of person who writes for a living and you wish to paint a legendary start-up founder in the most nefarious light possible, you also need a good origin story. You might weaponise pop psychology mixed with school-age gossip, served neat, to suggest something like the following: because a person was bullied or shy as a kid, he must necessarily have psychological defence mechanisms that explain all of the reasons you don’t like him or his politics. It’s a relatively vile flavor of historicism.

Most nihilists are not contrarians.

And it’s been applied, by journalist Max Chafkin, to Peter Thiel, the billionaire co-founder of PayPal and Palantir Technologies, legendary Silicon Valley investor and, more recently, backer of Republican U.S. Senate candidates J.D. Vance and Blake Masters. Recently, New York Magazine published an extract from Chafkin’s new biography, The Contrarian, under the headline: “Peter Thiel’s Origin Story: His ideology shaped Silicon Valley. It began to form when he was an angry young man.” The piece begins with a fantastical story about Thiel as a 20-year-old college student talking himself out of a speeding ticket by saying that he thinks the relevant laws are unconstitutional.

When I talked to Thiel, I told him I found this story far-fetched. It’s hard to believe he told a cop that he doesn’t believe in speeding laws—and even harder to believe that the cop would’ve accepted this argument. Yeah, it’s pretty weird, Thiel tells me. “Yes, I drove a Rabbit to a chess tournament back in 1988,” he says. “Yes, I probably drove pretty fast. And yes, I probably got pulled over by the police and I probably talked myself out of a ticket. But the key part of the story could not possibly have happened: there is no way that I would have said, ‘I’m not sure if the concept of a speed limit makes sense. It may be unconstitutional. And it’s definitely an infringement on liberty.’ I was trying to talk myself out of a speeding ticket, and I would have known never to say anything remotely like that. That’s crazy! I wouldn’t have said it then, I wouldn’t say it now.”

The story seems designed to serve as a window into Thiel’s innermost psychology. But what of its origin? What if a college kid—someone who was in the car with Thiel that day—is just remembering the most “hilarious” version of a story from 33 years ago? Thiel tells me that his best guess about what happened is this: “We spent the rest of the ride coming up with, and joking about, more and more ridiculous excuses that I might have used. The ‘speeding is unconstitutional’ excuse was so preposterous that it’s what stuck in someone’s memory.”

Imagine the mental and soul-splitting gymnastics that one must have to perform to turn an incident like that into a framework through which you interpret nearly the whole of another person’s life.

Thiel and I are both students of Stanford professor René Girard (which is how we met—I recently wrote a book about Girard’s ideas). From his academic burrow at Stanford, Girard was a voracious news-watcher, but his interest was not in the news itself, but in the news-making events behind it all; in the effect that the news had on the events; in the interpretation of those events; and in the fascination that certain people or events engender in others. Best known for his theory of mimetic desire—that humans unconsciously imitate the desires of others—Girard saw hyper-imitative behavior everywhere.

Fascination, Girard told his biographer Cynthia L. Haven, is always a sign of mimesis. When a number of people become obsessively focused on one person or thing, it attracts other people to it. (“For example,” Haven told me, “look at the millions of American eyes on suspected killer Brian Laundrie right now. What has that done to him and us?”) Our perception of reality is distorted by it. And people are fascinated by Peter Thiel. The sensationalized speeding ticket story is one of many outrageous claims made about the man—including that he is a nihilist.

“Man, I feel I am an extreme opposite of a nihilist,” Thiel tells me. “I believe in ideas. Maybe I believe in ideas too much. I think back to some ideological debates, like the ones on campus at Stanford, and I actually believed there were people on the other side of these debates—I thought we were actually talking about ideas. But now I have a much more mimetic read on it. I think the people who are ideological are in the minority.”

People who think they’re talking about ideas are often talking about fashion. (At the Met Gala this year, ideas were literally fashion: Alexandria Ocasio-Cortez wore a white dress with the words “TAX THE RICH” emblazoned in red across the back.) Thiel reflects on his Stanford days and his early career: “Those who seemed nihilist are the ones who seemed more driven by fashion than by ideas. The people least driven by fashion were the people who had unfashionable ideas.” That’s not to say that every unfashionable idea is more principled or sincerely held than fashionable ones. But perhaps we can examine a person’s relationship with the truth based on how well an idea has served them, or how much they’ve had to suffer for it.

Girard believed in the existence of “things hidden since the foundation of the world” (which is also the title of his magnum opus.) He argued that there are important truths to be discovered in the world, truths which are covered up by layer upon layer of mimesis and lies—lies which are themselves propagated through uncritical, imitative behavior. It’s an anti-nihilist position.

“We live in a world today,” wrote Girard, “especially in the humanities, where the very notion of truth has become the enemy. The idea is you must have plurality. So, today, the interest of plurality takes precedence over the search for truth. You have to say ahead of time that you don’t believe in the truth. In most of the circles in which I move, decency is equated with a skepticism verging on nihilism.”

It’s not hard to see why Girard was not popular in academia, or why Peter Thiel is not popular among people who graduated from Ivy League schools with degrees in the humanities. One of Thiel’s initiatives, the Thiel Fellowship, pays entrepreneurial students $100,000 to drop out of college and work on their ideas for two years. The psychology of being a student at these schools is reminiscent of Charles Dickens’s Great Expectations, Thiel tells me. Disappointment is inevitable. (At a freshman orientation at Yale in the early 2000s, the Dean supposedly said something like: “Congratulations, you’ve made into Yale. You’re set for life.” Does anyone believe that anymore?)

But, despite the headline of the new biography, Thiel is not fundamentally a contrarian. A hardcore contrarian sticks a minus sign in front of whatever the majority thinks—which can be a miserable, counter-productive, way to live. But when I interviewed Thiel for my book, Wanting, he told me that he bet on Facebook (Thiel made the first outside investment in the company) precisely because he saw the vast majority wanting to use it. “I bet on mimesis,” he said. People would want to be on Facebook because other people wanted to be on Facebook. And part of Facebook’s power was the need to talk about what was on Facebook—so it was doubly mimetic. (Today, something very similar is happening in cryptocurrencies: people who love cryptocurrencies don’t just invest in them; they talk about investing in them.)

Most nihilists are not contrarians. It’s easier to go with the flow rather than put yourself at risk of ostracization because you believe something to be true. And in a purely relational framework in which acceptability and consensus are more important than what is true, to be a “centrist” is seen as something unequivocally noble. Yet it’s often the case that the sacred center—the place of consensus—is simply the place where the greatest number of lies are told.

Thiel, then, is not a strict contrarian, but a Girardian: he believes that the truth exists, that the truth is rare, and that the truth is almost always obscured by the majority and the minority alike. They are locked in their own battle for power; whichever narrative is more fashionable often passes for the truth in any given milieu. Thiel’s own book, Zero to One, makes his position clear. “You can’t escape the madness of crowds by dogmatically rejecting them,” Thiel writes. “The most contrarian thing of all is not to oppose the crowd but to think for yourself.”

Entrepreneur Marc Andreessen likes to say that a successful businessperson gets two magazine covers: one on the way up, and one on the way down. Thiel certainly got his first one. He was lauded as one of the “PayPal mafia,” the group of early PayPal executives who nearly all went on to successful second (and sometimes third) acts. At that point, mimesis worked almost entirely in his favor—but now the tables have turned.

A fundamental part of Girard’s theory was that when human beings mimic one another, conflict is inevitable—and is often resolved by what he called “the scapegoat mechanism.” Just as mimetic desire can converge on one person and make that person an overnight celebrity (see Tik-Tok), blame converges mimetically on one person, too. We might call this a “Girardian moment.” It can be, for the life of the scapegoat, a very dangerous moment.

Peter Thiel’s Girardian moment came on 21st July 2016, the year after Girard died. Thiel took the stage at the Republican national convention in support of Donald Trump. He had fantasies, perhaps, that Trump might disrupt our sclerotic government. (Disruption came—but not in the way anyone, including Thiel, probably imagined.) He must have known what he was doing at the time, throwing his hat in the proverbial ring—a ring that was, in fact, an amphitheater filled with many hungry lions, and with billions of spectators working themselves into a frenzy over the Trump association.

On that day, the mimetic forces began to converge against Thiel. There has been a non-stop barrage of stories painting him as an ever-more extreme and controversial figure ever since. The media can’t resist making him a Trumpian totem, digging up Roth IRA investments he made 20 years ago—a decision to place a risky bet that took advantage of our antiquated tax code. He is seen as the kind of dangerous figure that should be purged from our midst.

The sensational new biography of Thiel has solidified, perhaps, his status as a Girardian scapegoat. But Thiel might find comfort in the words of Girard himself. “Books themselves will have no more than minor importance,” he wrote, speaking of history’s unfolding. “The events within which such books emerge will be infinitely more eloquent than whatever we write and will establish truths we have difficulty describing and describe poorly, even in simple and banal instances.”

Books are often just symptoms of our underlying condition. They are products of the culture from which they emerged. Ours is a scapegoating machine.

Luke Burgis is an entrepreneur and the author of Wanting, and writes about the intersection of Athens, Jerusalem, and Silicon Valley. Read his Q&A with Ethical Systems here. 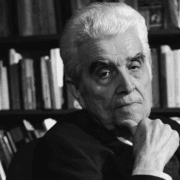